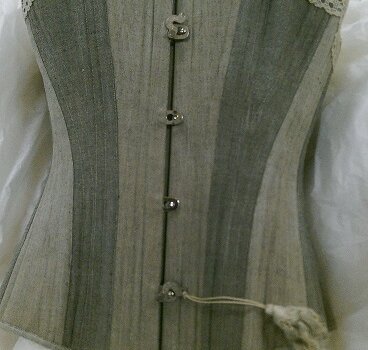 Have you ever seen 14 ladies in heaven? Well that’s exactly what happened when we went to Snibston museum last week to see some of the Symington collection of corsets. We were let loose with all the corsets in front of us & we could even touch. Oh heaven! it was just like letting children loose in a sweet shop. The corsets were all from the Victorian period, but varied a lot in style & shape. I’ve taken some photo’s as you can see, they are not up to the usual standard as I forgot my camera & had to resort to my mobile phone. I think this one was my favourite. 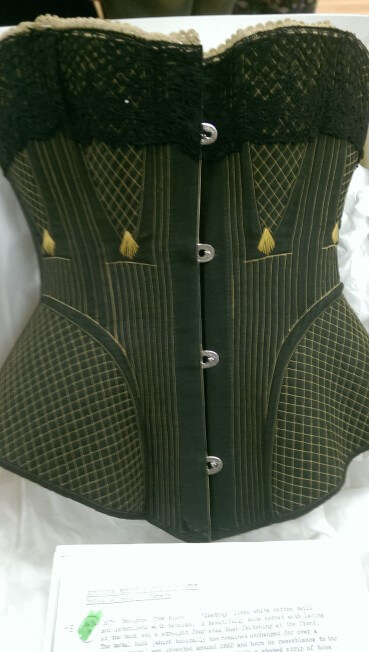 I  just love the gold stitching & flossing which makes this a beautiful garment. Far too nice to put underneath & hide it. There was a facsinating book with all the samples of the different flossing patterns. This is just one page. 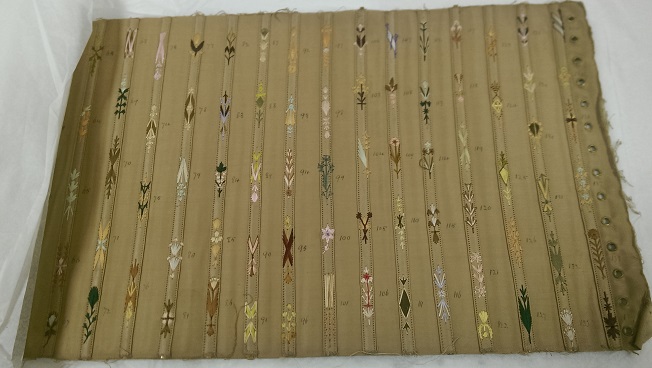 This was the sample book taken round by the salesmen for you to choose the right flossing for your corset.

The next corset was made for the hotter climates as you can see it has ventilation holes to stop you getting too hot. This was a favourite of ladies who went with their men when they were serving in the army in places such as India. Think what it must have been like to wear a corset in such hot climates. 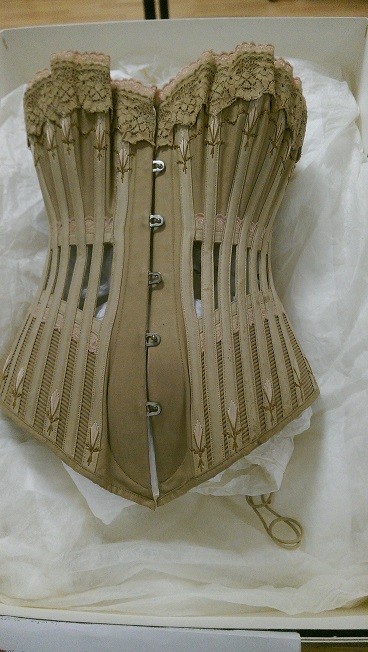 There were corsets for every occasion including riding & a maternity corset. One of them was called the pretty housemaid  & was marketed for girls in service. It was the strongest & cheapest corset made but still it cost as much as two months wages so wasn’t a cheap item to buy. I can’t imagine doing anything other than standing very still whilst wearing a corset.!

Sarah, who was the lady in charge of the costumes at Snibston was very informative about the corsets having done a lot of research along with her colleagues. She told us that the corsets had quite a lot of different things inside to bone them as whalebone was very expensive, some of the corsets had cane in them one even had feather spines in it. The Symington company had several factories at the height of it’s popularity. The main factory was in Market Harborough which is the other side of Leicestershire to English Couture.  The factory finally closed in 1990. They were famous for making liberty bodices.

I had a nice surprise whilst I was at the museum. Two years ago as part of the arts festival which was ran along with the Olympic games a lady crocheted three giant lionesses. I went to several locations where they were exhibited only to find that I had missed them every time. I walked around the corner of the museum from our private room for the corsets in to the main costume gallery only to bump in to the lioness exhibition. Unfortunately I had run out of battery on my phone so couldn’t take a picture but was very intimidated by the size of these lions & amazed at the workmanship involved in making them.

Snibston has the largest costume collection in the country outside of London. We are waiting until September to see if the local council will close it & sell the land. I for one hope that it doesn’t happen as I love spending time at the museum. I hope that we can run another trip out there to see some more of their collection as the ladies who made the trip all seemed to enjoy themselves. I’ll keep you informed as to the progress of the museum & hopefully I can take some more of you there in the future.

If you would like to make your own corset then why not book on to my Modern corset course.