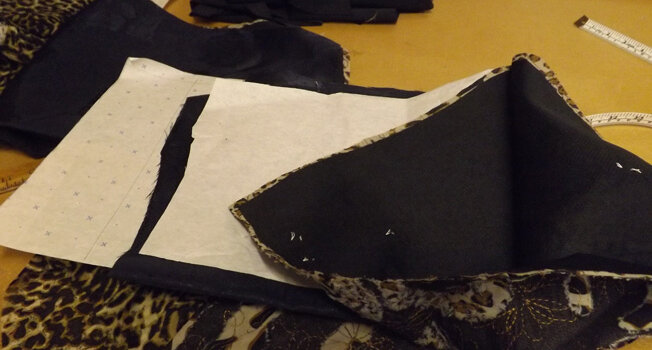 Latest News on the preparation for the NEC

Some of you will know that I’m going to be at the Sewing for Pleasure exhibition starting on the 19th March. I’ve been planning for this exhibition since last May time. The plans up until the New Year were mainly in my head. Just before Christmas we had in the shop some cutaway denim embroidered  on to leopard skin print crepe de chine, & some leopard skin print chiffon. I fell in love with these fabrics as soon as I saw them but it was the reaction of some of my students who were around when the fabric was delivered that gave me the idea for the clothes samples I was going to make. One lady said it would make a lovely skirt another said a denim jacket & a third said a handbag. This got me thinking, one fabric could be used for numerous projects. So just after the holiday break I set to work making an evening dress out of the fabric. The bodice has an interlining of firm collar & cuff canvas & the skirt is fused with fine sheer fusible. I’ve finished that & I think it looks good. (You’ll have to wait until the exhibition to see it)!

I’ve also created a bra using the same fabrics. With a powernet back. As you can see from the photo the knickers to go with the bra are in progress. The leopard skin print chiffon  cut on the bias makes beautiful lingerie. 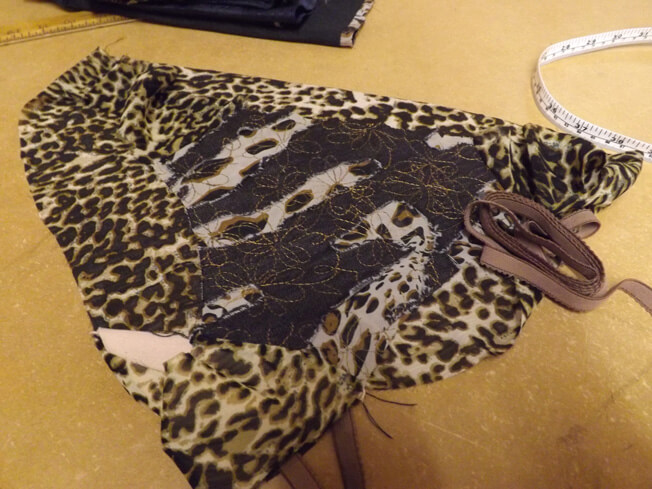 I’ve now made a posh denim jacket using the washable supersoft as the interlining. I still have to make a decision about buttons but other than that it is finished. That just leaves a skirt to go with the jacket & everything will be done. My workroom now looks as though a man wearing jeans has been eaten by a leopard!! but it is just the way I work, I will have to tidy up eventually. I was hoping to get all these outfits finished by the end of January but as usual I’m running a bit behind schedule.

I’ve also been told this week that my presentation giving you an insight into a bespoke tailoring workshop has been accepted. So I will be giving this presentation every day at the show. I’m not sure what time it will be but I’m hoping to get as many people there as possible. On the stand I will be running a challenge for myself. I’m going to try to make a jacket whilst I’m at the show. I will have to cut it out before I go as there won’t be enough room for me to do it there but other than that I will be trying to make it during the show.  So if you are around please pop by to say Hello, it’s always great to see friendly faces.