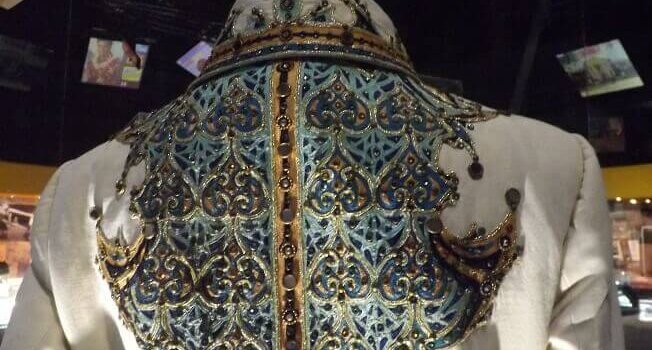 How did Elvis keep his belts up?

A few weeks ago I went down to the O2 arena in London to see the Elvis exhibition. What a great look at the man & the excesses he took everything to. There were a couple of beautiful cars including the biggest pink cadillac I have ever seen. On the vehicles front there was also a georgous red & silver gleaming Harley Davidson motor bike. It looked as if it had just come out of the factory.

There were some of his stage costumes as you would expect. The lighting in the exhibition was very poor for taking photos. All of them were lit from the floor so the top half of all of the costumes was very dark & the bottom half really bright. Fortunately for me I only really wanted bits & pieces of the costumes for the details. The full jumpsuits reminded me of the over the top state of 1970s fashion. As you can see from the photo’s some of the embroidery was fantastic. I was always fascinated by his ornate belts. Going around the exhibition there was a fantastic saddle all decorated & again highly polished. The sign which went with the saddle said that the man who made the saddle also made all of his belts.   So I got the chance to see his belts really close up.

As he wore jumpsuits with no belt loops on them I had always wondered how he kept his belts on as he wore them around his hips. I know at the end of his life he was a large man but even so this is impossible to do. Especially as the belts were so ornate & heavy, see the photo. Then I went around to the back of the exhibition case I thought to photograph the cape on the shoulders only to find that the belt had slipped on the dummy & lo & behold a piece of velcro. Mystery solved!