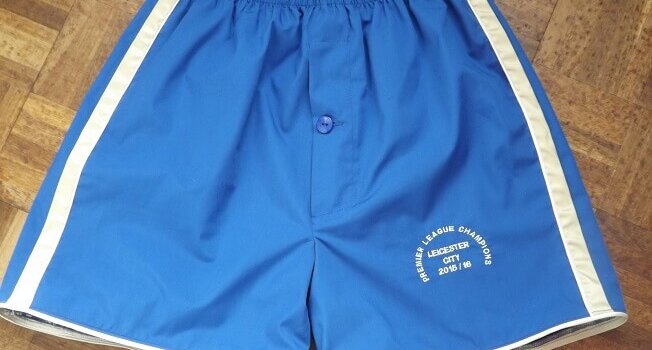 Well it’s been a very exciting night here in Leicester. Just in case you are on another planet Leicester City won the premier league title last night. We had to wait until another match finished at just before 10pm before it was confirmed. Then the champagne corks started to pop. I have to admit it happened in our house, & not much sleep happened. I got up very early this morning to finish off these boxer shorts. 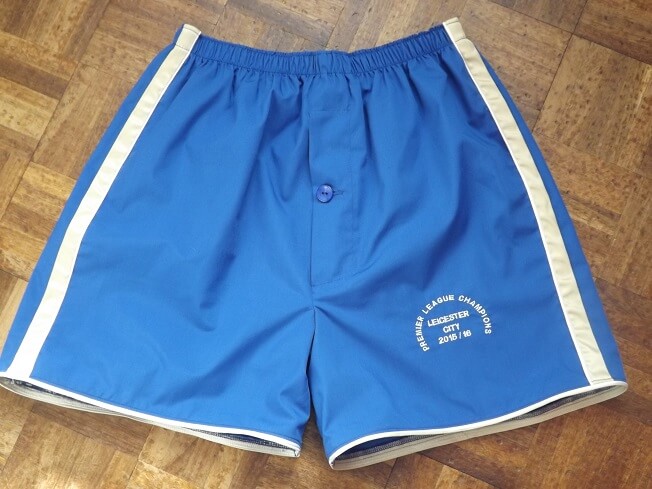 I worked on them yesterday until I could go no further without the embroidery. I was under strict instructions from my superstitious sister that I wasn’t to embroider champions until they were officially crowned or it would jinx their chances of winning. Every City fan would have agreed with her.

For those of you who read the first part of this blog you will remember that I said my Mum knitted two cardigans with the City team names on them & I didn’t know what had happen to the second one. Well I have been in touch with my friend Bruce who the cardigan was made for & he still has his as well. My Mum would have been really chuffed that they are still around. It was Bruce’s idea to make the boxers. He asked if I was going to do anything for men on the Leicester City front. This got me thinking & these are the result. I haven’t shown anyone them yet so you are the first ones to see them. I might even have a male model ready to try them on later on this evening, & be photographed. Watch this space to see if he is brave enough to actually go ahead with it. He was all for it on Sunday morning when I was starting the design.

I used to do a half day course making boxers shorts some years ago & this has made me think some of you might want a go. Let me know what you think. We don’t have to put the Leicester City stuff on them we could do any colour you like.