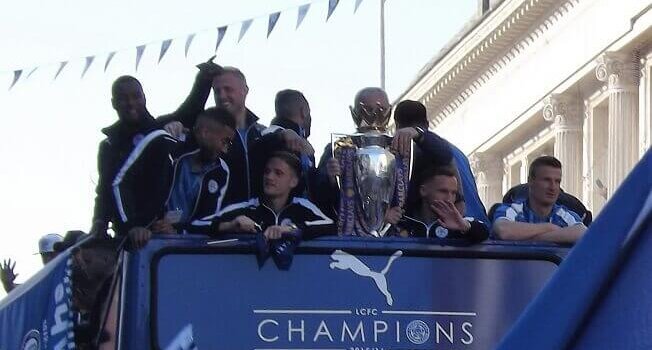 Now is the time to Come to Leicester

As you all know sport is very high on the agenda in my house. The last few weeks have been very exciting. I’m sure you are all aware of the success of Leicester City football club. I know the national newspapers have covered every kick of the ball. If you are fed up with that you should be living here in Leicester. I don’t really follow football but I’ve seen all sorts of matches, drunk champagne & been invited to parties because of it. The whole season was finally finished off with an open bus top tour of the city with the Premier League trophy & a party in the park afterwards. You had to be there to really get the full force of the atmosphere but I thought you might like to see some of the photos I took. People were hanging out of windows & on top of bus shelters just to get a glimpse of the bus. 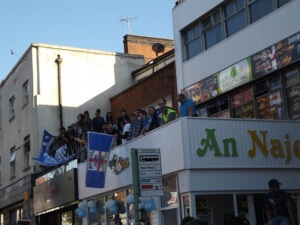 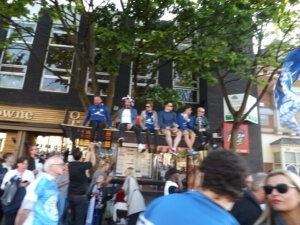 This road is where I used to work when I was tailoring. Normally there are four very busy lanes of traffic going up & down it. There were 240,000 people on the streets & I personally saw people from Italy, Thailand, Japan & USA. Leicester is suddenly the place to be. (I’ve always known that of course). Everyone was very happy waving & smiling at each other. All creeds & colours were in the crowd & differences were forgotten.

So what is the cause of the sudden turnaround in Leicester’s fortune. Well some people put it down to the reburial of King Richard III. This very clever poster was spotted in the crowd.

The parade was finished off in one of Leicester’s parks where a big party was held. The party has now moved on to Thailand where the billionaire owners of the club live. So now we all have to settle down back to normal. For how long?

Well maybe a couple of days, my team, Leicester tigers are playing in the premiership semi-finals on Saturday & if they win we will all be going down to Twickenham for the final the following week. This is one of my favourite days out during the year. I’m keeping my fingers crossed because we don’t have a fantastic record against Saracens whom we are playing, but a win wouldn’t be the most unlikely sporting achievement in Leicester this year!

Now is a great time to come to Leicester, we all have smiles on our faces & welcome people from all over the world with open arms. Book a course with me during the Summer months & witness the feel good factor for yourself.