Inside the Queen’s back garden

For my birthday I was given tickets to go inside Buckingham Palace to see the Queens 90th Birthday exhibition. I tried to forget about it at the time as I’ve had to wait over six months for the day to arrive. I was so excited, to actually stand where all my life I’ve seen the carriages arrive to drop off the Queens family & heads of state. You wouldn’t have wanted to be with me, I was just like a child in a sweet shop. We went all around the gallery, then the mews to see the amazing carriages & then finally after going through lots of security checks we were there actually inside the palace.

ME in the Queens palace!!!

We followed the guided tour around & eventually we got to the room where the fashions were on show. You are not allowed to take photo’s inside the palace so I left my camera at home. We joined all the people going around the edge of this room & saw clothes from all eras of her reign. It only took about 20mins. I was walking very slowly. I thought that that was it & I really enjoyed being that close to her majesty’s clothes. At the last case in the room they had a gold silver & bronze medal from the London Olympic games. I couldn’t believe how big they were. Behind this exhibition was the dress she wore to open the olympics.

Then we walked into the next room & it was completely full of some of the most beautiful dresses the queen has ever worn. Both her wedding dress (which my Mum said was the most beautiful dress she had ever seen. She queued up for hours in the 1950’s to see it) & the coronation gown were there. This had the most fantastic embroidery on it. There were many dresses, suits, coats & evening gowns on show. Far to many to choose a favourite one. There were two or three more rooms with lots of things in them including her uniforms which were fantastic.

When we finally got through the palace we had to have tea in the garden as you can see. 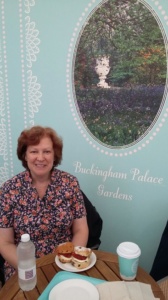 I hasten to add that only one of the scones was mine! We also had an ice cream as we walked through the garden. I did managed to take some photo’s of the gardens, one of which you can see at the top of the page. We had a quite amazing day & the embroidery on the dresses has started me thinking about having a go at tambour beading! I’ll let you know how it goes.