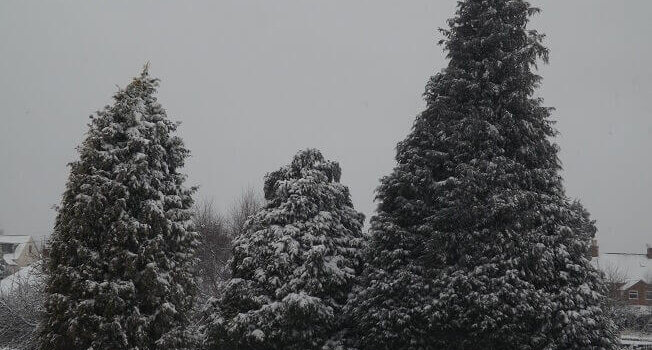 I was brought up by two parents both of whom loved Christmas. My Mum was the biggest child ever, always waking up at the crack of dawn to open her presents. My Dad would hang Christmas decorations from anything that didn’t move. He always had streamers, balloons & tinsel up right until twelfth night & woe betide anyone suggesting they came down before that. So it’s not surprising that my sister & I are both Christmas people. Yesterday was designated trimmings day but things got a bit out of hand. We woke up to Mother Natures attempt at decorating for Christmas.

Now, one form of weather which I really don’t like is snow. it is beautiful to look out on but it causes so  much trouble. Disrupting every plan you have. I have never understood anyone who wants to go out & throw cold wet snow everywhere or build a snowman. Much less anyone who throws themselves down hill or mountain sides with flimsy pieces of wood or plastic between themselves & the snow. So we decided to stay inside all day. I took lots of photos from every window we had. (I didn’t want to get cold)! It did look very pretty from the window. Under some of this white stuff are my sprouts for Christmas dinner. 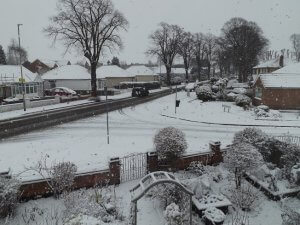 Now I’m not one to shy away from a challenge, Mother Nature had done her best so now it was my turn. Things started out quite nicely when I managed to make this wreath for the front door. 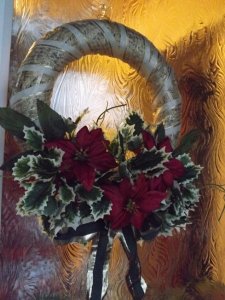 Of course it would’nt go on to the front door as we have the number etched in to the glass on the door so it had to go on the side window. Still it looks alright.

Then we decided as we were stopping in all day that we had plenty of time to look through all the decorations we had in the loft. My Mum was a flower arranger & all her stuff was up there along with Dad’s streamers & everything we have collected along the way. By the time we had brought down all the boxes you couldn’t get into the bathroom two bedrooms & the hall. That didn’t include the stuff we bought whilst shopping for the decorations for the shop. We decided to start with the tree. At one of the many garden centres we have visited recently we saw a tree which had its lights put on up & down the branches instead of round & round as Dad taught us. I think it looks better (sorry Dad) & it’s easier. Of course you can’t forget your favourite sports team during the festivities. 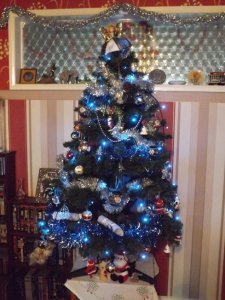 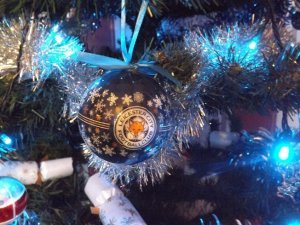 This is where things started to get a bit out of hand. The hearth needed trimming & we just went for it. We used lots of the flower arranging stuff we found in the loft & hopefully did Mum proud. 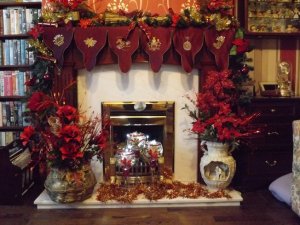 With the lounge done, of course we didn’t stop there, we have decorated the porch which is so brightly lit you can see it from the bedroom windows. The hall, the dining room & the conservatory. Well you never know which room you might want to spend Christmas day in. Santa’s grotto has nothing on our house but we love it. We have also bought & wrapped all our presents & tonight is card writing night.

Of course we still have almost two weeks of work before we get there & I will be sending out orders until Thursday 21st December. I will be back at work on Tuesday 2nd January 2018. You can book courses & place orders at any time during the holidays. Starting next Monday 18th – Thursday 21st I will be around & the shop will be open from 10am – 3pm if you need anything at the last minute.  I hope all of your plans are going well.