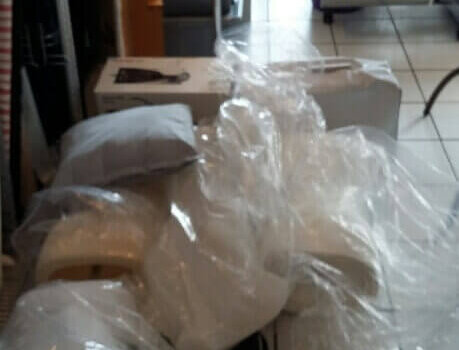 Day four of the show

We got up this morning to a covering of snow, and wondered whether we would make it to the NEC. With everything in the car in case we got stuck, we set off. Thanks to the local councils the main roads from Leicester to Birmingham had all been cleared and treated. So the journey here was quite easy considering all the warnings on the radio.

The show opened and we did wonder if there would be any visitors braving the weather, but more than we expected arrived through the doors.

As we arrived early this morning it would have been rude not to look around the show. I found a wonderful stand selling an amazing assortment of buttons. The name of the company is totally buttons

The lady who runs the company is very nice & has a real passion for buttons. I spent a fortune but I was buying buttons for fabrics in the stash. The stash has been added to on a grand scale mainly by Wendy but I have  one piece as well.

As usual we are very tired at the end of the show but it has been great meeting so many people during the show and seeing the enthusiasm is still there for sewing.

The challenge final score is Bra’s 4, Knickers 7. Not bad considering all the people we got to speak to.

We managed to get back to Syston & unpacked the car  by 6.30. This was mainly due to the show closing at 4.30 this year. It has always closed at 5 for all the year’s we have been going.  We just dumped the entire contents of the stand on to the shop floor , as you can see from the photo’s. I will be in bright & early in the morning to clear up the debris. 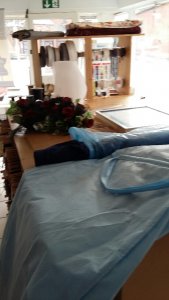