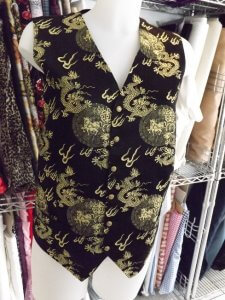 Waistcoats all over the Place

Waistcoats all over the Place

I know most of you are a bit fed up with the World Cup. Don’t worry it’s all over on Sunday.

As you know I usually decorate my shop window for all sorts of occasions. You may remember the last World Cup when I went all out & even made an England bra & knickers. Only for them to be knocked out within a few days. That window was a tribute to my Mum who decorated our shop window in 1969 to support Leicester City in the F A Cup final. Both times the teams lost. So when it came to Leicester City about to win the Premiership title a couple of years ago I was banned from doing the window until it was confirmed. As I was considered a jinx!! The same thing happened this World Cup. I was told in no uncertain terms that I couldn’t dress up my window. Well that’s confirmed, it’s NOT ME.

One of the more unusual things that the World Cup has thrown up is the big interest in waistcoats. For those of you not following the tournament, Gareth Southgate, the England manager always wears a waistcoat on the touchline. Even if it is only a Marks & Spencer one!!! There are Waistcoats all over the Place. During my tailoring training I learnt to make waistcoats. I even won an award from the London College of Fashion for waistcoat making. I made numerous waistcoats for my Dad who had very conservative tastes when it came to his clothes, except for his waistcoats, then anything goes. He had waistcoats for all sorts of occasions with any pattern you can think of. You can see pictures of some of them in this post. I do like making waistcoats as they can be made fairly quickly but you get to do some interesting techniques. I really like putting in pockets & if you do a traditional waistcoat you can put up to 4 pockets in it. You can also do hand stitched edges & buttonholes which I like to do to relax. 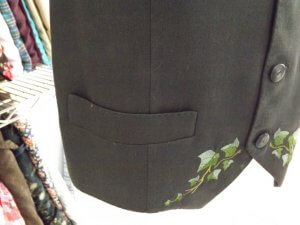 I do run a course for learning all the techniques for making waistcoats, including solving the problem of turning the shoulder. The techniques taught can be applied to both ladies & gentlemen’s waistcoats. I didn’t have a course scheduled for this year but as the interest is there I have put on a date if anyone is interested. Wednesday 12th September will be the day if you want to smarten up your man to look like Gareth. Alternatively, come along & learn to make yourself a beautiful waistcoat.

By the way I’m about to dress the shop window with all the waistcoats I have to hand. Well done lads.