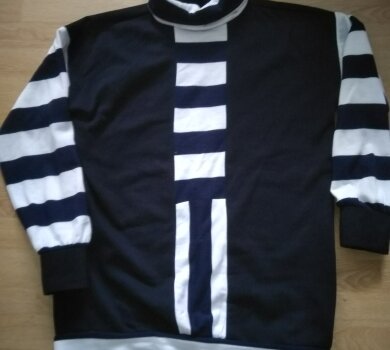 Here we are in hibernation again. I prefer the word hibernation as it sounds a lot cosier than lockdown. I’m trying to do some sewing again. For some time, I’ve been desperate for some new sweatshirt type garments, just for changing into at night when the day is done. A long time ago I made some hand painted sweatshirts. Ever since I’ve been wearing these sweatshirts, first of all over jeans, then for the gym and now for putting on at night. The paintings have faded a bit, but the fabric has now gone into holes, good job no one sees me!

When I was making these sweatshirts, there was a factory in Leicester who made the fabric and matching ribbing. I used to go over there and buy fabric at around £3 per mtr. Of course, this factory has closed now and getting quality sweatshirt fabric is almost impossible. So, I went to a storage box I have stashed away, which contains all the left over bits of the fabric. Most of the pieces are not really big enough to make anything, but if you put your mind to it, you can create almost anything.

I thought that the box only contained sweatshirt fabric but discovered that there are a few more things in there as well. More pieces of lingerie fabric and other bits and pieces not on the official stash list. Oooops!!

In last months Burda magazine there was a lovely sweatshirt garment which appealed to me. Of course, there wasn’t enough of one piece to make the whole garment, but I found a piece of navy and white stripe, along with a plain piece of navy blue.

The plain piece was big enough for the back of the sweatshirt and the stripe was enough to do the sleeves, but neither was big enough to cut out the front. The plain one was long enough but not wide enough, so I cut the outside of the piece as far as I could. Then I cut a long strip of the striped fabric going horizontally, (this was the shape left over from a previous project). This left me a bit short at the bottom with no fabric left  going the right way. So, I turned the fabric around and joined  it to the strip with the stripes going vertically, this created a design feature for the front of the sweatshirt. I then just joined the strip to the rest of the plain front and cut the neckline and bottom in line with the pattern. The left over bits and pieces formed the collar cuffs and bottom edge.

I tried the sweatshirt out last night, it is very cosy and warm, so much so that I fell asleep within half an hour!! I have found a piece of red stretch velvet in the box which I’m sure would make the body of another one, I wonder what I can find to go with it?

Try to keep sane at this time by sewing as much as you can.